The idle air control valve (or idle control valve) is an important component of the engine, which could be found on most of the car models these days. This unit is often located in the car’s throttle to make sure that your car would idle smoothly by regulating and controlling the flow of air which comes in the engine. Most types of idle control valve are designed with a motor which is built in some areas on the intake manifold of your car. This motor or valve is regulated by a control module of the engine, which would change the idle speed based on parameters, including electric system load and engine temperature.

In case this control valve goes bad, it would immediately lead to many problems in your car. Thus, in this article, we have outlined some potential causes as well as common symptoms of a defective idle air control, so that you could deal with this problem correctly.

Variation in The Idle Speed​

This is probably one of the most common signs of a problematic IAC. In general, most of us know that when we accelerate our car, the RPM of the engine will also increase, and once we step the gas off, this number returns slowly to the usual idling speed.

Nevertheless, when the RPM gets below the average level, which is about 800 RPM in most vehicles, it is highly likely that there is a problem with the IAC valve. In some cases, this valve would be clogged or near the replacement age. So your car would stall rather than idling after releasing the throttle.

The most important purpose of an idle air control valve is probably ato make sure that your car would idle smoothly. Nevertheless, this function would be rough with a defective IAC valve. In these situations, you will notice shuddering or heavy vibration when you are idling your vehicle.

Also, there would be no or very little flow of air coming into the engine. This would make your vehicle vibrate, shake, and might also cause a loud sound when idling. Because of this uneven idling, you would notice that the vehicle will immediately stall when you run the car’s engine for next time.

Perhaps your vehicle’s IAC valve would be blocked with carbon gunk, and thus it would not open large enough to allow the air to coming in the engine. 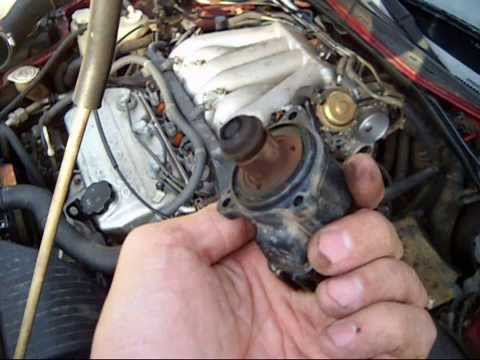 Engine Stalls Because of Load

In normal condition of idling, your car would still have a smooth idling even when you turn the heater or AC on. Nevertheless, when the idle air control goes bad, your engine would stop suddenly as you turn up the heater or AC (the load) on the idling engine.

Also, you would also face a drag with the steering wheel after switching on the AC. To restart your car’s engine in these cases, you need to turn the load off and wait in a couple of minutes so that the engine would cool down, then crank it up again.

Light of The Check Engine is Turned On​

In fact, the most apparent symptom of a malfunction in the engine is the shining of the check engine light, which is situated on the dashboard of your car.

This sign means that there are some possible problems with your car’s engine. In these cases, you should use an OBD2 scanner to check the error code.

To do this, you should connect a scanner to the connector of an OBD2 that is located on the side of the driver. After that, turn on the key, and allow the scanner to analyze your car. If it gives a code with 11 errors, then an issue is occurring with your IAC valve. You could change this old unit with the new one if cleaning does not resolve your problem.

How to Know if The Idle Air Control Valve is Still Healthy?

You could check the condition of an IAC valve by seeing its resistance. To do this, you should connect the ohmmeter with pins 3 and 2 of the valve while disconnecting the IAC.

How to Use Rubbing Compound to Remove Scratches?

How to Double Clutch on Your Car?